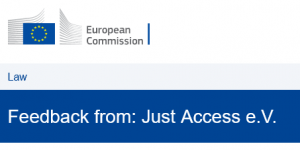 Here is our feedback to the roadmap:

Just Access e.V., a German NGO focused on access to justice, welcomes the initiative to include an improved definition and scope of hate speech and hate crime on the list of EU crimes, with particular attention to sex, sexual orientation, age and disability as the criteria for hate speech and crime. Our recommendation is to improve pertaining EU regulation by balancing the human rights of extremist civil society organisations engaged in hate speech and crimes against EU States’ international and municipal legal obligations to protect their own citizens; and to deprive extremist NGOs that promote hate speech from their sources of funding.

The long-running World Values Survey and its European variants, including the Eurobarometer, have demonstrated that attitudes to sex, sexual orientation, age and disability are heavily influenced by cultural and ideological background, and that notions of heteronormativity, bias against women in the workplace and the voting booth, and associated unacceptable norms and practices strongly correlate with some traditional cultures. Developing mutual understanding and toleration, and overcoming hate speech and crime, require pro-active commitment and engagement; they are not the inevitable result of co-existence in European societies that, by design, also offer the option of isolated enclaves and self-radicalisation as an alternative to shaping and endorsing society-wide shared norms and practices. This is why hate speech and crime concerning sex, sexual orientation, age and disability cannot be viewed outside the context of empirically verified determinants, including culture.

Two chief cultural challenges relevant to improving legislation concerning hate speech and crime are immigration and state-sponsored hate speech. The integration of immigrants and refugees provide economic and cultural benefits to Europe, and adequate legal provisions must ensure that immigrants and refugees do not become victims of hate speech and crime; and conversely, that they are not isolated and self-radicalised due to unrealistic images of their host society as hate-filled and worthy of hate in turn.

Foreign states’ sponsorship of hate speech and crime is a well-known and empirically verified fact. The French, Dutch, UK, Swedish, German, Swiss and other legislatures are debating at this moment how to counter Muslim Brotherhood-dominated NGOs that are deliberately and effectively inciting hatred and fear across Europe. The foreign funding from Turkey, Qatar, and other non-EU States that enables such NGOs to incite hatred through TV channels, school textbooks and courses on combat is an explicit part of the current parliamentary discussion in France, the UK, and the Netherlands. Improved EU regulation of hate speech and crime must address the responsibility of state sponsors of hate speech and crime under public international law; otherwise the structure of incentives and available means of such organisations will continue to remain a core part of the problem.

The call for contributions notes that, “the initiative thus complements the Counter-Terrorism Agenda for the EU”. Numerous legal mechanisms for the suppression of terrorism indeed apply to this issue, but the present contribution focuses on direct improvements of EU regulation on hate speech and crime. In that context, we note that Art. 20(2) of the International Covenant on Civil and Political Rights (“ICCPR”) is a mandatory limitation on the freedom of expression to curtail hate speech. So is Art. 4 of the International Convention on the Elimination of Racial Discrimination, which was specifically applied in Jewish Community of Oslo v. Norway (CERD 30/03). In Faurissan v. France, the UN Human Rights Committee upheld the same principle to combat anti-Semitism.

Another relevant document at the UN level is Human Rights Council Resolution 7/19, which urged States to prohibit “the dissemination (…) of racist and xenophobic ideas and material aimed at any religion or its followers that constitute incitement to racial and religious hatred, hostility and violence”.1 According to the UN Special Rapporteur on the promotion and protection of the right to freedom of opinion and expression, the following elements are essential in determining whether an expression constitutes incitement to hatred: “real and imminent danger of violence resulting from the expression; intent of the speaker to incite discrimination, hostility or violence; and careful consideration by the judiciary of the context in which hatred was expressed”.2

The Rabat Plan of Action on the prohibition of advocacy of national, racial or religious hatred that constitutes incitement to discrimination, hostility or violence (“Rabat Plan”) declares that “under international human rights standards, which are intended to guide legislation at the national level, expression labelled as ‘hate speech’ can be restricted under articles 18 and 19 of the ICCPR on different grounds, including respect for the rights of others, public order or sometimes national security”.3 In addition, the Rabat Plan refers to the obligation of States to prohibit expressions that amount to incitements to discrimination, hostility or violence.

At the European level, the General Recommendation No. 15 of the European Commission against Racism and Intolerance, which is part of the Council of Europe, is particularly relevant, as it deals with State obligations to combat hate speech. This document defines hate speech as “the advocacy, promotion or incitement, in any form, of the denigration, hatred or vilification of a person or group of persons, as well as any harassment, insult, negative stereotyping, stigmatization or threat in respect of such a person or group of persons and the justification of all the preceding types of expression”.

Moreover, it recognises that “the use of hate speech appears to be increasing, especially through electronic forms of communication which magnify its impact, but that its exact extent remains unclear because of the lack of systematic reporting and collection of data on its occurrence and that this needs to be remedied, particularly through the provision of appropriate support for those targeted or affected by it”. The Commission also states that an especially serious form of hate speech is the one that intends to “incite, or reasonably expected to have the effect of inciting others to commit, acts of violence, intimidation, hostility or discrimination against those who are targeted by it”.

In its General Policy Recommendation No. 15 on Combating Hate Speech, the European Commission against Racism and Intolerance (ECRI) called on parties to “withdraw all financial and other forms of support by public bodies from political parties and other organisations that use hate speech or fail to sanction its use by their members and provide, while respecting the right to freedom of association, for the possibility of prohibiting or dissolving such organisations regardless of whether they receive any form of support from public bodies where their use of hate speech is intended or can reasonably be expected to incite acts of violence, intimidation, hostility or discrimination against those targeted by it”.4 In its explanatory memorandum, ECRI specifies that such a withdrawal of support should cover “not only grants, loans and other forms of financing for the activities of the organisations concerned but also the making available to them of facilities or premises, the possibility to use staff and any other kind of practical assistance”.5

According to the ECtHR, in the case of non-political associations the threshold for the necessity of interference is lower. In view of the difference between the importance of a political party and of a non-political association for a functioning democracy, only political parties are protected by the highest standard of scrutiny concerning the necessity of a restriction on the right to association.6 Moreover, the national authorities enjoy a broader margin of appreciation in their assessment of the necessity of interference in cases of incitement to violence against an individual, a representative of the State, or a section of the population.7 The Court has also recognised that an association whose leaders put forward a policy which does not respect the rules of democracy or which is aimed at its destruction and the flouting of the rights and freedoms recognised in a democracy can be subject to penalties.8

The ECtHR has argued that in the event of incitement to violence and/or hatred, State authorities enjoy a wider margin of appreciation when examining the need for interference. The Court found that the conviction and sentence of an applicant, convicted for remarks that incited violence and/or hatred, were proportionate to the aims pursued and necessary in a democratic society.9 The Court also declared an interference with the freedom of expression to be lawful in a case in which the applicants were convicted after distributing leaflets and brochures advocating and glorifying warfare in the form of jihad.10

In sum, as this representative though partial overview shows, both international and European law already exists to enable the EU to improve legislation concerning hate speech and hate crime, specifically by honoring EU States’ obligations to dissolve extremist NGOs and prosecute individuals who abuse NGOs to promote hate speech and incite hate crimes.

2 Report of the Special Rapporteur on the promotion and protection of the right to freedom of opinion and expression, Frank La Rue, submitted in accordance with Human Rights Council resolution 16/4, A/67/357, of 7 September 2012, para. 46.

3 Rabat Plan of Action on the prohibition of advocacy of national, racial or religious hatred that constitutes incitement to discrimination, hostility or violence, para. 14.

We use cookies on our website to give you the most relevant experience by remembering your preferences and repeat visits. By clicking “Accept”, you consent to the use of ALL the cookies.
Do not sell my personal information.
Cookie SettingsAccept
Manage consent

This website uses cookies to improve your experience while you navigate through the website. Out of these, the cookies that are categorized as necessary are stored on your browser as they are essential for the working of basic functionalities of the website. We also use third-party cookies that help us analyze and understand how you use this website. These cookies will be stored in your browser only with your consent. You also have the option to opt-out of these cookies. But opting out of some of these cookies may affect your browsing experience.
Necessary Always Enabled
Necessary cookies are absolutely essential for the website to function properly. These cookies ensure basic functionalities and security features of the website, anonymously.
Functional
Functional cookies help to perform certain functionalities like sharing the content of the website on social media platforms, collect feedbacks, and other third-party features.
Performance
Performance cookies are used to understand and analyze the key performance indexes of the website which helps in delivering a better user experience for the visitors.
Analytics
Analytical cookies are used to understand how visitors interact with the website. These cookies help provide information on metrics the number of visitors, bounce rate, traffic source, etc.
Advertisement
Advertisement cookies are used to provide visitors with relevant ads and marketing campaigns. These cookies track visitors across websites and collect information to provide customized ads.
Others
Other uncategorized cookies are those that are being analyzed and have not been classified into a category as yet.
SAVE & ACCEPT
Twitter
WhatsApp
Reddit
LinkedIn
Copy
Email