On May 18th Just Access and MAAT for Peace, Development and Human Rights co-organised a side event to the 31st session of the Commission on Crime Prevention and Criminal Justice on Improving Access to Justice – Gender Based Violence: Good Practices and Challenges. The event was moderated by Wessam Farid who welcomed and introduced the speakers: Ayman Okeli, Chairman of MAAT for Peace, Sara Masetti, Legal Felow at Just Access and Marketa Klicova, Head of Design at Just Access.

Read the full presentation of the Just Access speakers below.

Good morning to everyone, I’m Sara Masetti and I’m part of Just Access, a non-governmental organization that works in the field of human rights, and in particular on improving access to justice.

First of all, I would like to thank Maat for peace, development and human rights for having us today since the theme of the meeting is such an important matter.

Women’s rights are transversal: they are protected by norms that cross various international legal spheres. We can find them, for instance, from humanitarian law to international treaties (e.g. ICCPR, art. 3). Despite this, too many national legislations still allow – and sometimes even promote – differences and discriminations against women, regulating the same subject differently depending on whether the person involved is a man or a woman. This happens in the field of marriage, inheritance, divorce, work – just to name a few.

As we all know, gender-based violence against women, unfortunately, is such a widespread issue that the United Nations qualifies it as a “global health and development issue” and make it fall under sustainable development goal 5.2.

This is the most pervasive yet least recognized human rights violation in the world and transcends factors such as the age, social class, geographical area and education1.

It is defined as an act that results in, or is likely to result in physical, sexual, or psychological harm to women, whether it occurres in public or private life (United Nations, 1995, Platform for Action D.112)2. It can be concretized in various behaviors, such as: marital rape, selective malnourishment of female children, forced prostitution, female genital mutilation, and sexual abuse of female children.

The most widespread form of gender-based violence is, though, the abuse of women perpetrated by their intimate male partners, that integrates the case of domestic violence3.

Domestic violence is insidious: it happens for the most part inside one’s own home, the place that should be the safest refuge, and is perpetrated by those who should love.

Domestic violence is a complex phenomenon that develops in different levels, which are connected to each other and are often simultaneous. It can be sexual, psychological and physical. As regards the latter, it can go from beating to throwing objects.

Psychological violence is instead harder to recognize since it’s more devious. The most common forms are verbal abuse, humiliation and belittling of one’s identity and opinions.

The victims of domestic violence often feel helpless and afraid, live in a constant state of anxiety but at the same time they are trapped in this vicious cycle from which to get out is much more complex than one might think, both for psychological and non-psychological factors, for instance: economic dependence.

Despite all of this, victims all around the world are often invisible and, when they are not, social institution legitimize, obscure and deny abuse, favoring instead the phenomenon of victim blaming.

To better understand the spread of the phenomenon of domestic violence I took into consideration the data of the country where Just Access has its headquarters, Germany.

According to the UN Global Database on Violence against Women about one out of four women (22%) in Germany have experienced physical and/or sexual violence by their intimate partner during their lifetime4. In a survey conducted by the Fundamental Rights Agency (FRA) in 2014, German women who have experienced domestic violence come to be even one in three5!

Domestic violence and, more generally, gender-based violence against women are universal problems, they concern all of us because their roots lie in our minds and in our way of reasoning, whether we like it not, whether we know it or not.

One of the fronts on which these issues can be addressed is that of culture and information. These are long processes that mainly take time and foresight; despite this, there are also concrete actions that can be taken and that can immediately offer help and support.

Around last November, Just Access made contact with Gewalt Ambulanz, a violence clinic within the institute of forensic and traffic medicine of Heidelberg University Hospitals. This clinic, through the work of a specially trained team of experts, documents injuries that can be used in court and offers protection of traces on body and clothing.

Our NGO, as mentioned at the beginning, aims to improve access to justice and wondered how it could contribute to the work already done by Gewalt Ambulanz.

I now leave the floor to my colleague Marketa Klicova who will explain to you the product of this collaboration.

Neoclassical economics, also known as standard or rational economics, dominated policy from the 1970s until the 2008 financial crisis. One of its core assumptions was that people have rational preferences which they pursue with optimal strategies based on perfect information. Neoclassical economics defined policy to such an extent that it created a flourishing subfield of law, known as “law and economics”, proponents of which advised governments and international organisations on how to calibrate legal harmonisation, and deterrence and incentives, in criminal, constitutional or trade law both domestically and interstate in a way that creates a calculable and clean order that robustly resists shocks and surprises. The total collapse of neoclassical economics was emblematised by Alan Greenspan’s memorable admission that markets and individuals aren’t, contrary to decades’ all-pervasive assumption, rational.6

The costly and creative destruction of rational economics gave birth to the healthy pluralist bewilderment we see today. One bright colour in the swirl is behavioural economics, which helps public policy take into account people’s predictable mistakes due to cognitive biases. For instance, people are consistently irrationally risk-averse, unable to take responsibility, they prioritise information that confirms their beliefs, and so on. Law and behavioural economics, the new band in town, produced “nudge units” that governments around the world stood up to save pension funds (by turning higher savings from an opt-in option into an opt-out option, with equal liberty for employees to change their minds but appealing to their subconscious that the default savings rate should be higher), to save lives (by mandating checklists in hospitals to reduce death rates from superbugs and drug interactions) and to stop wars (by accepting that some dictators are really crazy, and not acting out some Machiavellian strategy).7

Ours is a law and behavioral economics project. It grew from a five-year project run by Harvard Law School about institutional corruption, which explored how cognitive biases become institutionalised, cause immense harm, and can be stopped.8 In the legal field of access to justice, which is our NGO’s mission, institutional corruption is most apparent when victims do not receive the information they need in a form they understand. When you are the victim of domestic or sexual violence or a street mugging, you’ll be traumatised and misunderstand half of the things the police are telling you. They cross informing you off their list. If you get an information package, and wish to initiate legal proceedings, again, you probably won’t understand every term, option, and legal consequences. Lab studies and real-life case studies have shown that what benefits victims of predatory lending or arbitrary insurance denial the most is a maximum two-page leaflet that is pellucid, legally accurate, and empowers victims to act.9 This is a new and growing field but it’s already clear that the best thing we can do for victims is to stop assuming that they’re always necessarily rational or at least able to attend law school before they identify the optimal legal strategy for their case.

Just Access has been developing a set of leaflets for the University of Heidelberg’s medical clinic for victims of violence. It’s printed on an A4 sheet to make production and handling easy. It’s folded to produce 4 pages. Pages 1 and 4, the outside, may look like this: 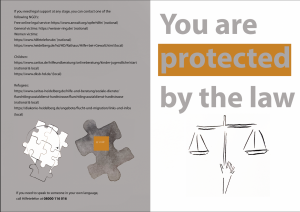 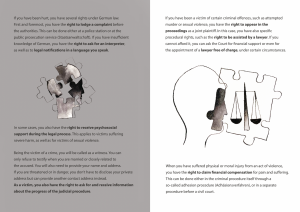 Once we test its usability and incorporate every suggestion, we hope to eventually distribute the leaflet in hospital wards, police stations, prisons, refugee shelters and other NGOs, with group-specific adaptations and in multiple languages. We will also collect data from victims and carers as they use the leaflets, and publish a scientific study in a few years which, we hope, will allow us to refine and scale up the methodology, and make it freely available to other NGOs and State organs in every context in which victims need help.

Except where otherwise noted, the content on this site is licensed under a Creative Commons Attribution-NonCommercial-ShareAlike 4.0 International License.
We use cookies on our website to give you the most relevant experience by remembering your preferences and repeat visits. By clicking “Accept All”, you consent to the use of ALL the cookies. However, you may visit "Cookie Settings" to provide a controlled consent.
Cookie SettingsAccept All
Manage consent

This website uses cookies to improve your experience while you navigate through the website. Out of these, the cookies that are categorized as necessary are stored on your browser as they are essential for the working of basic functionalities of the website. We also use third-party cookies that help us analyze and understand how you use this website. These cookies will be stored in your browser only with your consent. You also have the option to opt-out of these cookies. But opting out of some of these cookies may affect your browsing experience.
Necessary Always Enabled
Necessary cookies are absolutely essential for the website to function properly. These cookies ensure basic functionalities and security features of the website, anonymously.
Functional
Functional cookies help to perform certain functionalities like sharing the content of the website on social media platforms, collect feedbacks, and other third-party features.
Performance
Performance cookies are used to understand and analyze the key performance indexes of the website which helps in delivering a better user experience for the visitors.
Analytics
Analytical cookies are used to understand how visitors interact with the website. These cookies help provide information on metrics the number of visitors, bounce rate, traffic source, etc.
Advertisement
Advertisement cookies are used to provide visitors with relevant ads and marketing campaigns. These cookies track visitors across websites and collect information to provide customized ads.
Others
Other uncategorized cookies are those that are being analyzed and have not been classified into a category as yet.
SAVE & ACCEPT
Tweet
WhatsApp
Copy
E-mail
Tweet
WhatsApp
Copy
E-mail
Tweet
LinkedIn
Reddit
WhatsApp
Copy
E-mail