– The speech of our Director Dr. Mark Somos on the side event at the United Nations Economic Commission for Europe Regional Forum on Sustainable Development: Promoting the SDG4 and its Role in Combating Extremism in Europe – 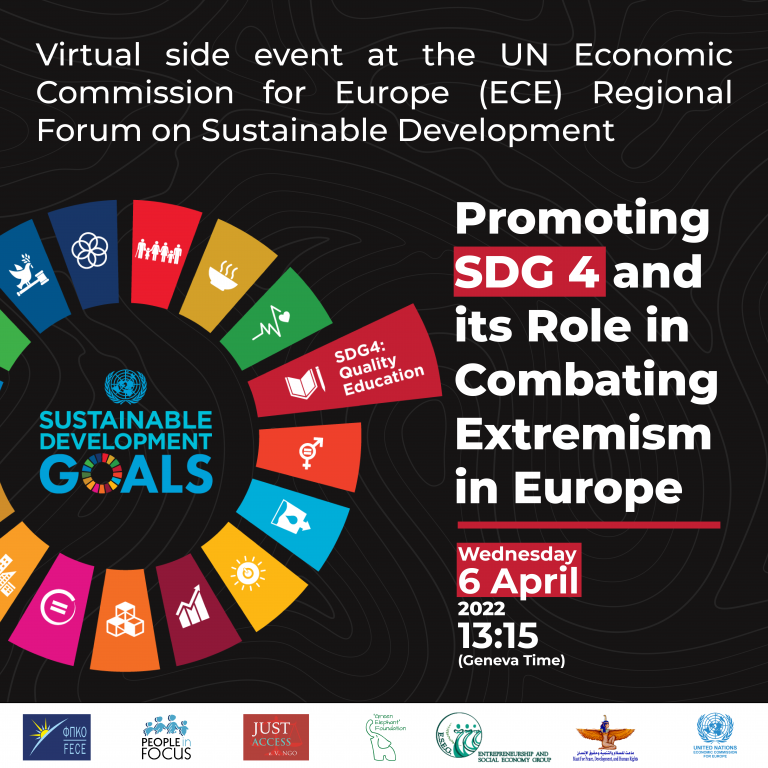 Thank you very much for this opportunity to listen and speak to you.

When I was 16, I moved from Eastern Europe to a boarding school in London. I grew up in a half Christian, half Jewish household, and in this boarding school I found myself surrounded by Muslims. I was fascinated, and they very kindly taught me about their religion, culture and customs. We started an interfaith student group, a magazine, and invited a range of speakers to address the whole school.

One day my friends told me they were upset by the sermons of extremist imams in mosques they’ve been attending. They wanted to call the police both because these imams’ views offended their religion, and because they didn’t want extremism to tarnish the reputation of London’s Muslim communities. They called the police, the imams were arrested and deported. So far so good. But to our surprise, some Muslims in the school wanted to beat us up. We spoke to them over months after that, and I saw a culture shock arise and dissipate between Muslims from Pakistan or Palestine or Malaysia or the United States.

We graduated and left for university, and many of us established little interfaith unions all over the UK. We formed an association, and from 1996, the Committee of Vice-Chancellors and Principals, now called Universities UK, asked us to formally report on extremism on campus. Since then, I’ve worked extensively with UK, Dutch and Swiss educational authorities on extremism, and had the good fortune to edit a major report for the European Commission based on stellar work by 12 European research centres.

I’ve also taught for 16 years, in UK, US and Dutch universities, and had to address extremism in my classroom. In my experience, it was always linked to deprivation. It was the poor kids with difficult family backgrounds who had the consistency of anger to block their natural empathy and intellect and come up with conspiracy theories and violent schemes.

I don’t want to talk about community-based deradicalisation, an exchange of best practices, or other very well-known policy mainstays against extremism in education.1 What I miss from the toolkit is ethnography, epidemiology and transparency.

Education isn’t limited to the classroom. It occurs at home, on the streets, via television and social media. Let me cite extreme cases. Prisoners in Nazi death camps, Rwandan camps for Tutsis, and in Syrian prisons today, taught and teach other. It’s an extraordinary thing. The Syrian version is known as the “university of whispers”, because prisoners aren’t allowed to speak, so they teach other, especially the children, in whispers. When prisoners die and new ones take their place, or as kids get older and younger ones join them, they pass on what they’ve learned from those who died. For thousands, this is their only education.

Or take the tribes of Myanmar and South Yemen. Since Myanmar’s military coup, and the unification of Yemen, these tribes have created an educational counterculture to the dominant curricula enforced upon them. They write and reproduce manually textbooks, and compose and teach songs, to preserve not only a general sense of community, but specific details of a past they aren’t willing to lose, but they hope will support a better future.2 Obviously, religious minorities from every continent and century can offer similarly complex and vibrant studies in education-as-resistance.

Such unauthorised spheres of education also produce extremism. Home schooling in rural America, a rampant counterculture of conspiracy theories and violent white extremism are shown to be causally connected. Bangladesh banned Islamic Relief from working in the Rohingya refugee camps as a ‘preventative measure against potential radicalization in the camps’.3 Lorenzo Vidino documented how the Muslim Brotherhood infiltrated and hijacked Western educational systems claiming they represented the Muslim majority, but designing and delivering educational content that was and remains highly conducive to radicalisation.4 I sat with Dutch lawyers working for boards that certify educational programmes, as they were trying to figure out the finer ideological points in curricula proposed by Salafists and by Jehovah’s Witnesses who wished to run independent schools in small Dutch cities. I saw the shock of Swiss authorities when they discovered the ideologies and practices of hatred and violence taught in kindergartens under the control of extremist NGOs. I listened to history teachers unable to convince their students in Marseille that the crusades really have ended and aren’t ongoing as a thousand-year uninterrupted conspiracy, and I’ve been debating the role of the Muslim Brotherhood in British community education for decades. 26 years ago, when I started, the level of governmental ignorance was striking. That improved to an extent, but it’s impossible to spot every dangerous nuance without community involvement. What I’ve found very informative is legally oriented ethnography, such as Vidino’s or Amira Augustin’s, which distills hundreds of interviews to show the strengths and risks of various forms of unofficial education. More of this, please.

The other thing I miss very much from the practice and research of anti-extremism in education is public health and epidemiology. Students without proper sleep, diet and exercise are far more likely to have mental health issues, and there is a strong and clear correlation between mental health issues and extremism. Yet we’d need metastudies to generate data on the impact of poor sleep, diet and exercise on extremism, because direct studies are all too scarce. To my mind, a well-fed, rested and healthy child or teen is significantly less likely to be trapped in a violent subculture’s irrational counternarrative, and suppress empathy consistently enough to become a dangerous extremist. But the vast majority of kindergartens, primary schools and unversities I know suffer from woefully underfunded or ill-designed nutritional schemes; they keep students indoors far too much; and operate tests and work habits that don’t support normal sleep habits. Epidemiological studies of the burden of disease and the ages of onset paint a clear and horrifying picture – and this is the situation in stable States. Think about failing States, unable to provide a healthy educational environment, and typically riddled with militias, gangs or other alternative entities with State-like functions – for instance, Hezbollah – which often produce their own educational and propaganda materials.5 The correlation between pediatric and juvenile epidemiology and extremism in an educational setting is unlikely to be lower in failing than in stable States.

Even without robust data, I’d wager that pediatric and juvenile epidemiology shows direct correlations with extremism in an educational setting worldwide. One reason why the Sustainable Development Goals is such a well-chosen and helpful framework for studying extremism and education is because SDGs were conceived holistically, and Goal 1 against poverty, Goal 2 against hunger, Goal 3 for good health, and so forth, are already connected to Goal 4 on education in a way that I think could be incredibly productive in addressing extremism and education in particular.

Finally, transparency. It’s not an exclusively Western or democratic value. Let me cite a few examples on why it’s more fundamental and how it’s misused. Prevent is a much-criticised, but I think fantastic organisation in the UK, and works with counter terrorism police units and extensively with local communities to prevent radicalisation.6 But in order to reduce mistrust of governmental interference, Prevent can only ask, not compel, local authorities to share their risk assessments. To my mind, this is a design flaw and shows not respect, but neglect of the local communities’ best interest. Similarly, an investigative journalist had to go undercover to be able to report on what’s being taught in Muslim schools in Germany, with shocking findings of extremism, hate speech and incitement.7 According to Newsweek, the Institute for Monitoring Peace and Cultural Tolerance in School Education reviewed over 200 official, authorised Qatari school textbooks and found pervasive antisemitism; and all Muslim pupils in Qatar, even expats from Europe, must use and are tested on these books.8 Transparency is a line in the sand, and to allow communities to promote counternarratives in educational settings paid from tax money is to miss the link between public interest and responsibility. It’s an erosion of, not an education in, solidarity.

Extremism is like cancer insofar as an ounce of prevention is worth a pound of cure. We know and do a great deal, and the Sustainable Development Goals provide a helpful framework for learning and doing more. I think legal ethnographies on unofficial spaces of education, low-cost high-reward investment in fundamental health and well-being policies in schools, and the presumption of and insistence upon transparency are three corrective and preventative measures that deserve more attention.

Thank you very much for your attention.

Except where otherwise noted, the content on this site is licensed under a Creative Commons Attribution-NonCommercial-ShareAlike 4.0 International License.
We use cookies on our website to give you the most relevant experience by remembering your preferences and repeat visits. By clicking “Accept”, you consent to the use of ALL the cookies.
Do not sell my personal information.
Cookie SettingsAccept
Manage consent

This website uses cookies to improve your experience while you navigate through the website. Out of these, the cookies that are categorized as necessary are stored on your browser as they are essential for the working of basic functionalities of the website. We also use third-party cookies that help us analyze and understand how you use this website. These cookies will be stored in your browser only with your consent. You also have the option to opt-out of these cookies. But opting out of some of these cookies may affect your browsing experience.
Necessary Always Enabled
Necessary cookies are absolutely essential for the website to function properly. These cookies ensure basic functionalities and security features of the website, anonymously.
Functional
Functional cookies help to perform certain functionalities like sharing the content of the website on social media platforms, collect feedbacks, and other third-party features.
Performance
Performance cookies are used to understand and analyze the key performance indexes of the website which helps in delivering a better user experience for the visitors.
Analytics
Analytical cookies are used to understand how visitors interact with the website. These cookies help provide information on metrics the number of visitors, bounce rate, traffic source, etc.
Advertisement
Advertisement cookies are used to provide visitors with relevant ads and marketing campaigns. These cookies track visitors across websites and collect information to provide customized ads.
Others
Other uncategorized cookies are those that are being analyzed and have not been classified into a category as yet.
SAVE & ACCEPT
Twitter
WhatsApp
Reddit
LinkedIn
Copy
Email